Drones are being used for all kinds of different applications these days, and one of the most exciting sectors is wind turbine inspections. Wind turbines have become increasingly important over the last 5 years and in the future, will continue to grow in popularity due to the global governments shifting towards renewable energy. With a great deal of large moving parts, these turbines need to be serviced and repaired on a regular basis.

Up until recently, wind turbines could only be inspected by rope access teams abseiling down with a hand-held camera. However, nowadays, a drone is a far safer and more cost-effective way of completing the same job.

In partnership with one of our clients from the USA, we were tasked with flying their drone in UK waters to inspect an offshore wind farm. Here's my summary of my brief time on open waters.

High tide and a chilly start

4:30 am, and my alarm went off. It was going to be high tide in 1 hour which is the only window we could leave port at Wells-next-the-sea with enough ground clearance for our particular boat. We arrived at the vessel at 4:50 am, and the boat crew start getting ready to depart. 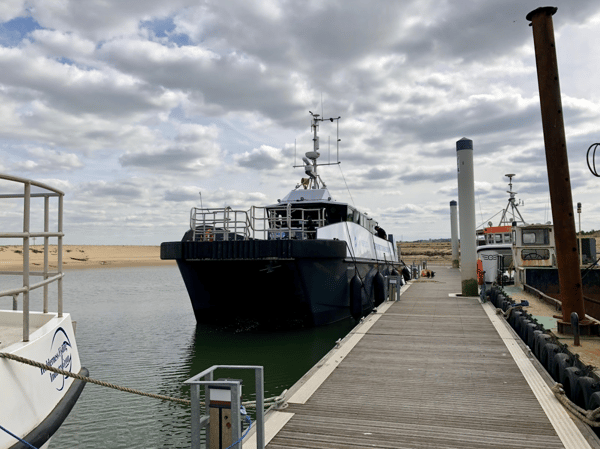 As we started to edge out of port, I could see the buoys that we had to follow to make sure we didn't run aground. The journey to the wind farm took approximately 1 hour, so I used this time to put the Li-Po batteries near the heater to gently warm them as it’ was about 5 degrees outside! (if you didn't already know, Li-Po batteries do not like the cold...)

We arrived at the wind farm and finally got to see the 54 turbines that we had to inspect. Each turbine was 125m tall, and one revolution of a single turbine can generate enough electricity to power a single house for 24 hours! The boat crew informed the control team that we had arrived on site and that we wanted to stop turbine number 1.

As the turbine came to a gentle stop, we gave the call to put a hard stop on that turbine so that one blade was pointing at a 12 o’clock position. As the drone we were using was autonomous, it needed to see the turbine like this to recognise it and carry out the inspection successfully.

The drone we used was loosely based on the Freefly Alta 6 with a custom configuration designed for wind turbine inspections. To fly this beast in the UK, you need to be classed as a 'Heavy Lift Pilot', which means you can fly aircraft within the 7-20kg category on your PfCO.

If you're thinking of becoming a heavy lift pilot click here find out more.

We set the drone up on deck and I carried out the preflight checks. Once completed I booted up the laptop and loaded the specialist software that will help us do the inspection.

Meanwhile, the boat crew were doing their best to keep the vessel about 10m away from the base of the turbine. Once we were all happy, we started the take-off procedure. There is not much room to manoeuvre on the boat, so the takeoff was quite tricky. However, once the aircraft was about 10m high and in the correct position to recognise the turbine, I flicked the ‘auto’ switch, and the aircraft shot up to 120m and began the autonomous inspection.

The aircraft captured about 260 photographs, and the complete inspection took about 17 minutes. I was continuously monitoring the flight for errors but thankfully the flight was successful, and the drone came home. I took over control and carefully landed the aircraft back into the boat. First flight complete!

We managed to do 14 turbine inspections on the first day alone, which would typically take the rope inspection crew about 7 days to complete. On the journey back to port we recharged all of our Li-Po batteries and packed down the aircraft. We entered port again at high tide, and the boat crew did all the final checks ready for the next day. A hard but successful first day.

We completed the whole farm in 10 days (we lost 4 days because of bad weather), and the wind farm owners were very pleased with the results. 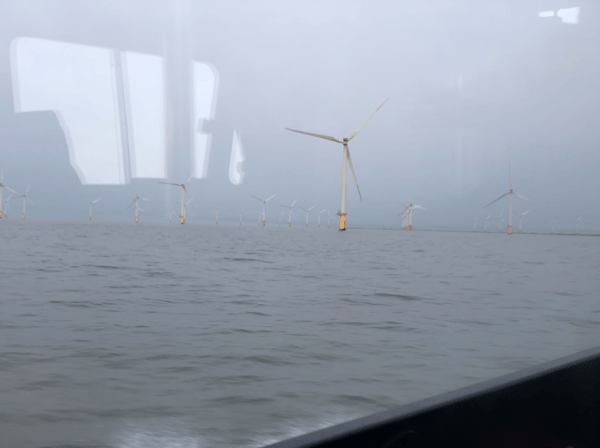 Over time, as industries adapt to using drones, they will see the potential to save millions of pounds over the years over conventional methods. We see the future as being inspection pilots a full-time career (similar to offshore workers), and is defined as highly skilled and essential for maintenance.

We hope as a company we can continue to be a part of this and train future generations of pilots to see the potential of the drone industry as it continues to grow and evolve.

It's not only wind turbines that can utilise drones for inspection, virtually all types of infrastructure can take advantage of this technology from bridges, solar farms, agriculture, construction and many more.

The future's exciting for drones, do you want to be a part of that?

Start your future career today by getting your Permission for Commercial Operation.